Here's a question for you: when was the last time you travelled by horse to ... well, anywhere other than the stable you started from? 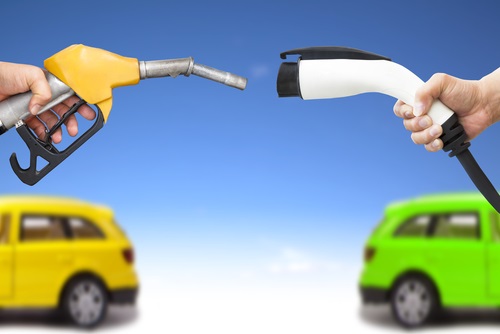 In 1900, horses were the de facto way for people to travel, whether riding them or in horse-drawn carts.

By 1925, that had changed: 15 years of the Ford Model T, or "Tin Lizzie," had revolutionized road transport and brought travel powered by gasoline to the masses.
Could the advent of electric cars follow the same trajectory?

That is, could a product that was still only a tiny fraction of the global vehicle market in 2015 become the de facto standard for new vehicle purchases by, say, 2040?
That's the question asked a few weeks ago in a Financial Times newsletter.

A working paper from the International Monetary Fund, titled “Riding the Energy Transition: Oil Beyond 2040," suggests that under an optimistic scenario, plug-in electric vehicles could reach as much as 90 percent of production by 2040.

The summary pretty much says it all:

The return of the electric car and its adoption, like that of the motor vehicle in place of horses in early 20th century, could cut oil consumption substantially in the coming decades.

Our analysis suggests that oil as the main fuel for transportation could have a much shorter life span left than commonly assumed. In the fast adoption scenario, oil prices could converge to the level of coal prices, about $15 per barrel in 2015 prices by the early 2040s.

In this possible future, oil could become the new coal.

Granted, that's under the most optimistic scenario—and few studies have gone quite that high.

But the unexpectedly sharp fall in the costs of lithium-ion battery cells means that the more recent they are, the more optimistic are the projections in studies from a variety of sources.

Take a report issued earlier this year by Bloomberg New Energy Finance, for example. It suggests that one-quarter or more of new vehicles will be electric cars by 2040.

In its 2016 World Oil Outlook, the Organization of Petroleum Exporting Countries (better known as OPEC) sharply raised its estimate of global electric-car sales by 2040 from 6 percent to 22 percent.

A study issued jointly by the Grantham Institute at Imperial College London and Carbon Tracker predicts that more than half of all vehicles on the world's roads will be electric by 2040.

The global auto industry no longer seriously argues that electric cars aren't real, or that they can't possibly be practical within the next two or three product cycles.

Serious concerns over the industry's ability to explain their benefits to consumers remain—but like other automotive advances, anecdotal evidence will be passed along by relatives, friends, neighbours and internet groups to new-car shoppers.

The next time you look at your own gasoline vehicle, ask yourself if it's about to become a relic in a world that's changing more rapidly than we may see.

They shoot horses, don't they?

Slightly Anglicised from a piece by John Voelcker. (To see the original article click HERE)